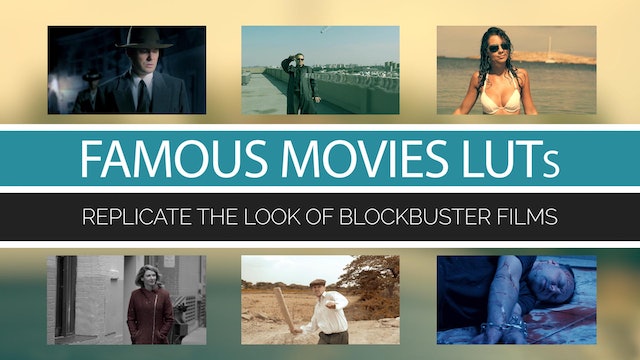 This is a collection of 20 look-up tables (LUTs) that will help you get the look of 20 acclaimed films.

LUTs are like magic brushes that paint your video or photos to give them a specific look. It’s a simple process of dragging and dropping each LUT onto your digital images, to see if you like the look that it creates. That’s it!

To see the color treatment that each LUT produces, please see this gallery.

Each LUT can be used on its own, or in combination with traditional color grading tools, to further customize each look.

The product comes with an instructional video, plus additional references (YouTube videos) for those who don’t have the experience of using LUTs.

Compatible with standard video and most LOG (flat) profiles!

For those filming in flat profiles, the package includes additional LUTs that go straight from a flat LOG profile to the Famous Movies LUTs – eliminating the need to first convert to Rec.709.

The most popular LOG profiles are supported, namely: C-Log, D-Log, S-Log2, S-Log3, V-Log and V-Log L, as well as RAW and the Film profile of the BlackMagic Design URSA Mini 4.6K and Pro cameras.

If you use a different profile, you will just need to go to your camera manufacturer’s website to download a free LUT for converting to the standard Rec.709 color space.

Use these LUTs in-camera and on external monitors to preview the color grade!

These LUTs can be used on monitors and cameras that support LUTs, for example the Atomos Shogun, Inferno; the Panasonic GH5.

To use the Famous Movies LUTs, you will need one of the following applications:

any other application that supports 3D LUTs

Right-click this and copy the link address.

Watch on your Television

Watch on your Computer